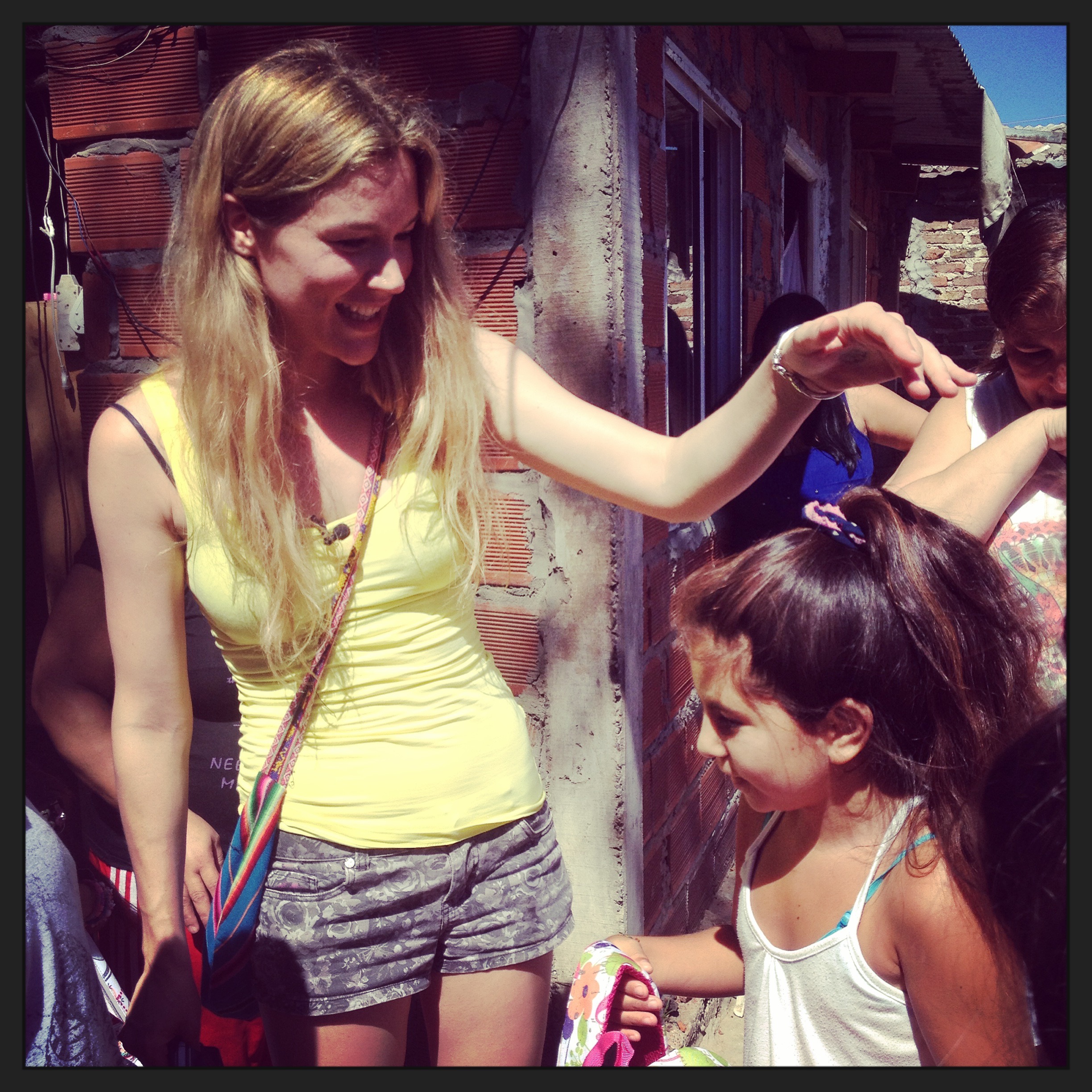 If I told you that British soul singer Joss Stone spent a morning in an Argentine slum handing out bags filled with vital school supplies to 100 primary school children, you’d probably mentally applaud her.

But if I said she’s visiting a charity or foundation on each leg of her Total World Tour that aims to take in every country on the planet (the UN recognises 196 nations although the unofficial total is 204), you might be stirred to something greater…

Kissing and hugging slum dwellers with a chirpy hola might not be everyone’s favourite way of spending a Sunday morning but Joss got stuck right in, meeting and greeting, chatting to little kids and parents, with an urge to cuddle even the most sick-looking of street dogs.

These efforts might make her the coolest humanitarian in the world today.

Mid-way through the South American stage of this epic tour that will take around two years to complete, Joss chose Todos Juntos for her Argentine visit, a UK- and Argentina-registered, locally run foundation that provides children from the slum (villa) with proper dental care.

And while the vegetarian singer didn’t have a chance to check out any of Todos Juntos’ three dental clinics located in José León Suárez, a sprawling and impoverished district north of Buenos Aires that’s home to four villas miserias, or shantytowns, she did visit Villa Carcova to help the charity’s founder Fiona Watson to distribute 100 rucksacks to kids who live in some of the worst conditions in the country. This is a place where violence, drug turf wars and shootings are part and parcel of daily life. Serious shit.

The value of life
After spending the morning in La Cárcova sporting sandals, shorts and a yellow vest top, Joss gave me an exclusive interview as we drove back to the Argentine capital.

Talking about her ambitious plan to visit 204 projects, she said: “No one problem is more important than another. I hold life in one place – and that’s pretty high – and that doesn’t differ from one person to another, one country to another or one life to another. We should all just look after each other.

“We’re 36 countries into 204 on this tour and we visit one project in each country. The first charity we met was Spana, which provides free veterinary care for working animals across the world. It was started by a lady who went to Morocco, like Fiona [came to Argentina], and was saddened by what she saw and so she tried to sort it out. And 90 years on it exists in loads of countries. Another charity I’ve seen educates young children about AIDS in Africa, as they don’t really know you can’t catch it from touching a friend. Others help animals, such as the sanctuary in Croatia run by three girls and the Chilean one that gets people with cerebral palsy to ride horses, accompanied, and move their muscles.

“So I’m going round the world meeting all these beautiful people, and I’m proving to myself and to whoever is watching that there is more beauty in the world than there is bad. I really believe that. The bastards make a bigger splash; when things happen it’s so painful to the world and we think it’s everywhere. But actually there are five percent of those fuckers while 95 percent of people are trying to do gorgeous things. We just have to continue – and try not to let the darkness have any of our light.

“That’s why I’m doing this – because I’m inspired by people like her [Fiona], and the lady who started Spana. It’s much more interesting than singing, in my opinion! Hey, I just sing songs and it’s nothing compared to what they do. Nothing.”

‘100 bags is better than none’
While the Devon-born singer’s presence undoubtedly boosts an NGO’s reputation, she is careful to choose projects that are already up and running. She added: “It’s nice to see projects that are working. Today I’ve been able to meet Fiona, who is pretty grass roots and doing what she can. Fiona said: ‘We’ve only got 100 bags’, but 100 bags is more than no bags, so that is the beginning of something that can really affect people’s lives. If a solution is found by someone like Fiona, spread it around! Maybe next year she’ll have 200 bags and the next, 300.

“The issues are the same around the world. People need food, water, shelter, healthcare and love. Those aren’t wants, those are needs so if those things are looked after then everyone is happy, but it isn’t always provided. Look at that [points at Villa 31 as we drive into Recoleta and Retiro on the motorway]. Oh my God.”

Joss has visited other slums while touring but the grime in Villa La Cárcova made quite an impact. She added: “What shocked me most was how dirty it is. I don’t now why it is – maybe it’s a lack of education. And that creates a lot of diseases. You can tell looking at the dogs that they’re drinking the water that’s around. The people looked fairly healthy but their teeth are fucked up as they don’t have good dental care, and the kids had big bellies and skinny arms. But they were so polite.

“A lot of people on my tour say ‘oh I can’t come with you on the charity visit because I’ll cry and it’s too emotional and sad.’ And I try to explain that it’s not sad, that it’s so the opposite of sad! You’re seeing this massive issue that you think you can never fix then you see these people, these individual human beings who say [adopts organising voice] ‘yeah, yeah we can, let’s do it. Everybody, get together I’ve got an idea’. That’s not depressing, that’s inspiring! I love it. And it’s a wonderful thing to see and it encourages me further that things can change. I think volunteers are my favourite people in the world!”

While her Argentina visit is short lived with one date tonight [March 8] at Luna Park, there’s a second dimension to Joss’ world tour: musical collaborations. Tomorrow she’ll be teaming up with local musicians to jam somewhere on the Costanera before moving on to Sao Paulo.

In addition, all her charity visits are bring documented by her brother and cameraman Harry, and you can check out the final cut on Joss’ website.

Bonus track
Later this evening, Fiona received some messages from the villa, parents grateful for the school kit they could probably never afford to buy. Yasmin is holding her new pack and a message written by Lincoln school student Ariela, which says: “Hello, I’m Ariela. I want to wish you a very good school year.” Besides their supportive message, Lincoln pupils up to grade five donated the school supplies such as rulers, pencils, crayons, felt pens, glue and notebooks.

Joss, if you’re reading this, those 100 rucksacks have already inspired change.

What can I do?
Todos Juntos depends entirely on donations to function and has done since 2005. You can help by donating via Just Giving.

>>> Further reading: The true story of a loose filling, a slum-kit and the kids who learnt to smile.